Assassin is one of the classes in Bless Online.

About the Assassin class[]

Assassin, the master of hiding and ambush


Assassins are experts in poison and hiding. They appear from behind their enemy and ravage and eliminate them. They have no name and they consider completing their mission as the only goal in life.

Assassins do their best to avoid direct conflict, not because they are afraid, but because it is unnecessary. A skilled assassin can secretly approach his enemy from behind and quickly stab his vulnerable spot. Sometimes critical attacks can be attempted by causing the enemy to fall into a trap or by poisoning the dagger. If appearing in front of the enemy or facing multiple enemies are inevitable, a risky acrobatic battle will take place. During that moment, the assassin will dodge all his enemy’s attacks with surprising agility while inflicting fatal injury by aiming for open spaces. When fighting with his comrades, the assassin will adhere to his own methods. He will move by concealing himself within the shadows, making it hard for even his own allies to know his whereabouts. The assassin always attempts to inflict critical attacks from behind his enemy. With quick and efficient movement, the assassin presents his enemy with death before they can even notice. However, if absolutely necessary, he will reveal himself and brandish his dual daggers like a storm. At times, the assassin may use various techniques of his own to scatter the enemy’s attention, or to help make the fight advantageous for his comrades in an unfavorable situation. 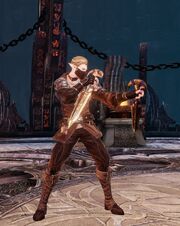 - When worn parts avoidance probability 0.4% increase in all areas of equip

If you are in crowd control status during combat, using the skill [Shadow Charge] will instantly remove it and you will dodge quickly to the front. When the skill is in use, you are immune to all status. You can use it immediately by using the SHIFT hotkey during combat. The initial energy expenditure is 25, and the reuse time is 0.60 seconds.

To use Shadow Charge you have to press the Shift key on your keyboard and 25 energy is consumed upon use. 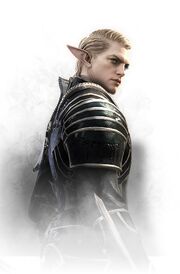 Historically, there are countless great men and heroes who have died at the hands of an assassin. Yet there are only a handful of times when the assassin’s identity was revealed. Assassins never reveal themselves because they are not interested in honor or glory. They value the outcome more than the process and never confuse their objectives with the methods. They are concerned only with quickly and absolutely eliminating their target, and if determined to be efficient, they will not hesitate to commit underhanded or cruel deeds. Hence most assassins are masters at hiding and ambush and are most knowledgeable about traps and poison. Assassins love to use daggers, which are easily concealable and wear leather armor that is although sturdy, does not make any noise. In the Holy Habichts Empire, feudal lords who opposed overly powerful aristocrats or emperors would often face a mysterious death. Whenever this happens, people would praise the Emperor’s spiritual dignity (Grandezza), and this became the name of the mysterious assassins’ group. According to the rare moments in which they were seen, these assassins who protect the Habichts royal family always cover their face with a silver mask. Also, the Betusa family, which have produced outstanding Iblis assassins for generations, is a subject of reverence both inside and outside of Migdal, and have proven themselves to be one of the ruling powers.