Hieron is one of the factions in Bless Online. 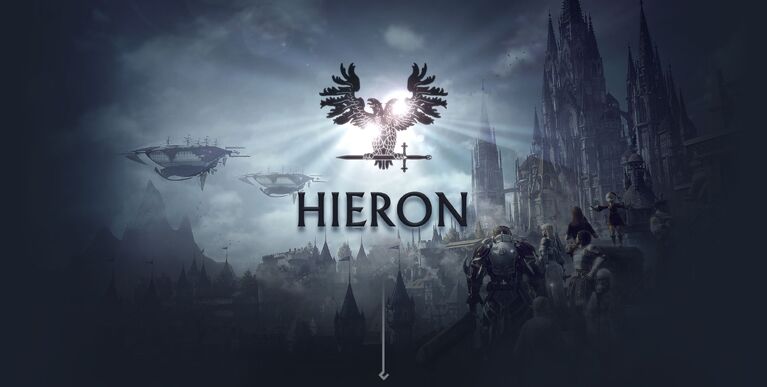 The ruling empire of the continent that protects the civilized world.

Hieron refers to the human Habichts Empire that controls the northern continent and its alliances, including all tributary states. For the past hundreds of years, the Holy Hieron Empire’s vast occupied territory has flourished, and it has protected the civilized world from barbaric invasions.

Hieron’s capital and its allied races’ base villages are all located north of the Cornus Mountains which cut across the center of the Bless continent. 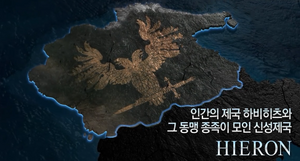 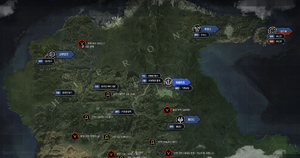 After the collapse of the Ancient Lumen Empire and the arrival of the Dark Ages, the civilized world suffered from pillaging by barbarian races such as the Orcs and Nols. But thankfully there were three heroes who valiantly came to the rescue. They were the Northern Altoquen King, Harman Habichts; El Gradis’ Great Guarder, Tanara Eilyanthes; and the Lupus’ Mighty Warrior, Bold Batar. 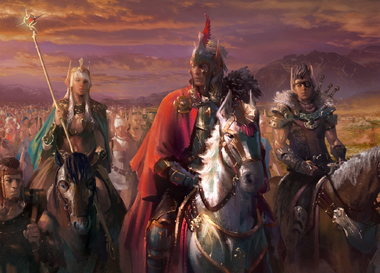 The three heroes, each leading their own race, went to war with Urudata, the Flag of Blood. After a long Holy War they were finally able to completely drive out the barbarian races from Castra Grandis.

After the end of the Holy War, Eiger, who had risen to the Altoquen throne, proclaimed the birth of the Habichts Empire (the legitimate successor of the Ancient Lumen Empire), and presented Harman with the posthumous epithet of Emperor of Light.

Eiger appointed Tanara Eilyanthes the Protector Marshall and Bold Batar the Margrave of the new Empire and declared that both the elves and Lupus, as honorary citizens, were entitled to every right within Habichts territory. 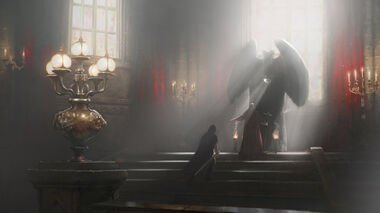 Both the Elves and the Lupus acknowledged the Habichts (who possessed the most expansive territory and biggest population) as conquerors of the northern continent and the leading power of the civilized world.

Like this, the holy alliance Hiera-Basillia of the fifth era was born with the Elves and Lupus as key members of the second human Empire (Habichts Empire). 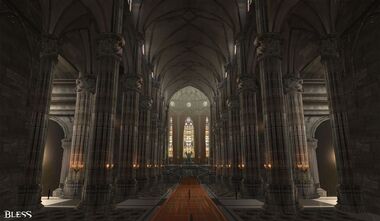 Although the Habichts Empire has been flourishing for some two hundred years since then, the Great Forest’s Millenial Empire has been deteriorating and the Lupus have continued to live a hermit life in Bran Forest.

In the end, as time passed, the words Hiera-Basillia that originally referred to the three races’ alliance now only invokes the meaning of the Altoque’s territory or the Habichts Empire.

In addition, through three expeditions to the south, the Great Emperor Eiger liberated Ancient Lumen territory and became the human race’s sole emperor. Soon afterward, the Habichts Empire began to call itself both Sanctus Imperium (in Ancient Lumen), and Hiligus Rahi (in Altoquen language) in official documents, both meaning the Holy Empire. 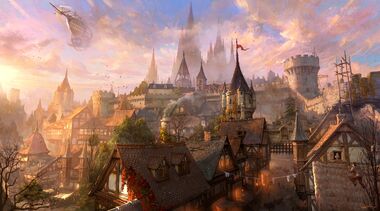 The various races under Hieron believe that in order to maintain the peace and stability achieved through the Holy War of the Dark Ages, there is a need to unify the whole continent.

To make this a reality, the three races are actively cooperating with the Holy Empire, which has taken on the central role of being the northern continent’s leader. 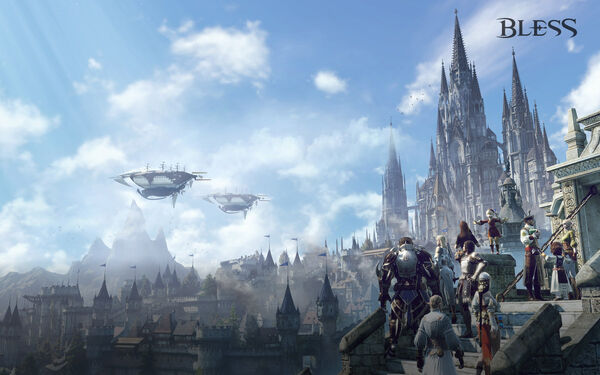 As the capital of the Habichts race, Hieracon is both the center of Hieron and a symbol of the mighty Empire. During the early days of the Habichts Kingdom, Hieracon was originally a fortified city built for dealing with uncivilized races such as the orcs and goblins.

Hieracon was later made the capital city by the Holy Emperor Harman who declared the establishment of the Habichts Empire after the northern continent was subjugated.

After a long time and various additions, the Hieracon fortress slowly began to possess the splendor appropriate for the capital of a great Empire. Nonetheless, remnants of its past as a fortified city (tall ramparts, steep slopes etc.) still remain. Hieracon is a capital city where various races live together in harmony even though Habichts culture is the mainstream one. 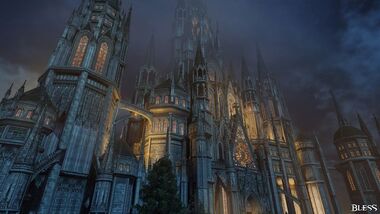 The spirit of the Habichts Empire is, in general, steadfast and tenacious. People of the Habichts Empire value stature and fame, which arises from their faith in a long-standing tradition that never allows anyone militarily incapable of obtaining a position. Therefore even the lowest ranked soldiers respect the general, though they are self-respecting will never act in a servile way even towards their superiors.

Outsiders who are visiting Hieracon for the first time usually say that the city feels like one enormous army barrack. This is not only because of the structure of the ramparts and passageways but also because the citizens of Hieracon are as strong-minded and disciplined in unity.

As the legitimate descendants of the Holy Emperor Harman and the Great Emperor Eiger, they are commonly called the Imperial Family of Heroes. The last emperor’s (Solar Emperor Guntram) throne went to the Adler family, and the direct heir, the crown prince Victor, is currently missing. 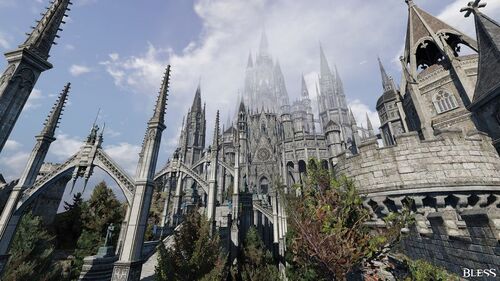 The Adler Imperial Family is a family that became the new owners of the Habichts Empire after Hartmann Adler took the throne. The Adler family was originally a founding member of the Empire and maternal relatives to the imperial family.

The Grandezza Assassins served as blades in the Emperor's shadow, supporting the throne with the looming threat of silencing whoever stood in opposition. Although the organization was secret to many, especially the common folk of the countryside and southern forests, the upper echelons of the Habichts Empire were familiar with the group's existence. In an effort to appease the aristocracy and rid the Empire of tyranny, Guntram Habichts declared the Grandezza to disband.

Grandezza operatives were trained in all manners of combat, subterfuge, and espionage—learning how to endure significant torture—and were utterly devoted to empowering the Emperor's rule. It was almost impossible to tell just who may have belonged to the Grandezza. Even some operatives, especially those in deep cover, could not distinguish their kith. They could only be identified for certain by the masks that they carried on their persons or wore, and they defended their allegiances and keepsakes with their lives. Some Grandezza, however, were close enough to even consider one another family.

Left without purpose after the order initially disbanded, the many Grandezza operatives suffered anomie and were reduced to petty criminals or were trapped in deep cover until Hartmann Adler, the "usurper," claimed the throne in the Habichts family's absence and revived the organization. As a result, the Grandezza are now utterly devoted to Hartmann Adler as their true emperor—and oppose the young and returning Victor Habichts.

With a beautiful lake and hills, Floren Kingdom is a country of swordsman, poets, and wine.

After King Charles offered his country to the Holy Emperor Harman during the Dark Ages, he proved to be the noblest of all the Empire’s feudal lords. However, within Floren, the royal family continues to be challenged by aristocrats.

An educational institution and home to a flourishing academia of the sciences, humanities, and magic, Carta University is one of the few territories within the Habichts Empire that maintains political independence. The University's role is to groom talented individuals who will one day become responsible for the Empire's future and leadership. Due to Carta's discrete nature, the Grandezza are ever at odds with the professors and students and have thoroughly infiltrated their ranks to monitor the institution's movements.

Marta Territory is a region of knights and herdsman where descendants of the nomadic Marta tribe live.

The Count Marta Family are descendants of the head of the Marta family which produced generations of brave knights and generals. They are a family that is at the forefront of every fight. The Great Emperor Eiger swore brotherhood with Marta.

The Marta (Martos?) Lordship governs and protects the southeastern steppes of the Habichts Empire. This region and its people are also famous for their horses, which they breed, rear, train, and then sell—some to the Empire's most accomplished of knights. As a result, they are in constant conflict with Griffons, whose main diet and favorite food is, of course, horses. Some humans who revere the Griffons believe themselves to be the very same as these majestic yet deadly creatures, and they support the Griffons' rights to hunt and eat as they please as well as care for the Griffons, their young, and even their eggs. The innate distrust and differences in lifestyles between the two peoples make for tenuous relations, etching a schism between them.

However, there is a legend of truce and cooperation in the territory from the founding days of the Habichts Empire. When the Emperor of yore once sought unity between the people of Marta (Martos) and the Griffons, he approached the Griffons to prove himself through combat trials. Passing the tests and exhibiting his noble character before a Griffon Sage, he brought together the two groups to fight back against the mutual threat of the barbarian tribes.

Bran Forest is home to the wolves protected by the Great Spirit and its guardians. 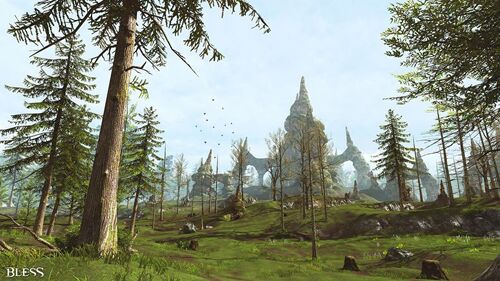 The Lupus were originally made from the forest’s darkest darkness in order to monitor lunatic gods. The honorable Lupus race is strong and agile forest hunters who value loyalty, devotion, discipline, and obedience.

Ban Senn, a vigorous and noisy harbor city built by the Mascus. 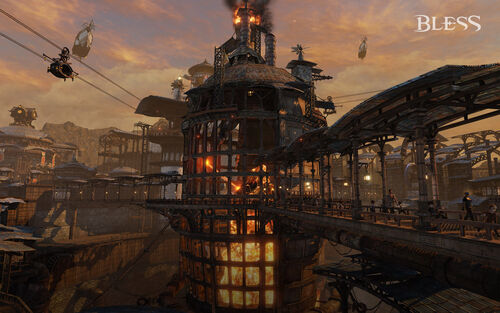 Curia is a religiously sacred place that follows the providence’s teachings. It is a place central to the continent’s religion.

Fedayin is the race that took refuge in this world after the Daimon Gods conquered their homeworld Gehenna (which became the underworld). They live practicing asceticism for the sole purpose of revenge and atonement.

El Gradis, the Elves’ hometown where dear memories of a glorious past remain. 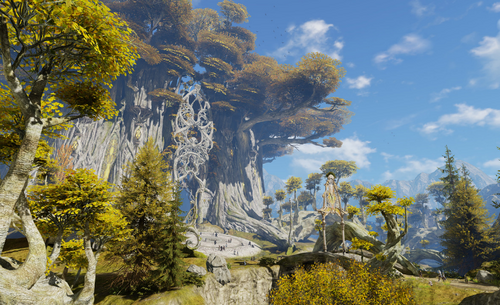 The elves were the first harmonious race to be born from this land and they have long enjoyed great prosperity. Even after the Tree of Life was burnt and the glorious ancient kingdom fell, their pride and noble lifestyle have not changed one bit.

A gloomy and mountainous place In the dreary rugged Beolan Valley, the mood can change depending on the area. 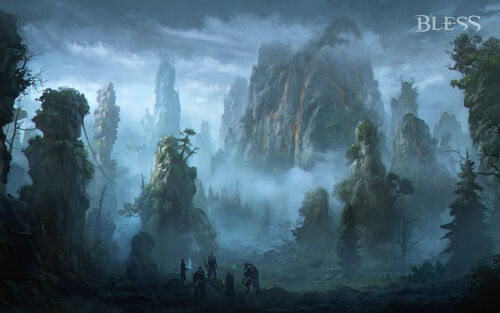 A town of knights and herdsmen Horse Mane Grassland is a place of wide, stretching flatlands and grasslands. As it is a place famous for its horses, most of its residents work in areas related to horse rearing. 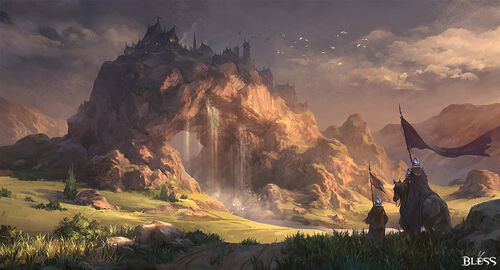