The Lore of Bless Online.

The Creation of the World[]

Eons ago, the Old Gods emerged from the Chaos and became the first race. They created the heavens and the earth, but their greatest creation was life, itself, as primitive, feral, beast-like creatures made in their images. However, the actions of the Old Gods were much like their origins: chaotic and whimsical. They sought to master the art of creation, causing great, perpetual calamities and conflicts—until the world awoke with the desire for order and sanctity amid the Chaos. Providence thus manifested, embodied within the world as well as the many images crafted by the Old Gods, and came to be personified by a powerful being called Physis. Physis firmly rejected the Old Gods and forced their submission with the power of Providence. Over time, most of the Old Gods came to obey and serve Physis while the rest fled into the endless abyss.

Physis then created five Dragons to become guardians of the elements. These Dragons searched all over the world to collect Seeds of Chaos left behind by the Old Gods. But one Seed was kept by the Titans, who wanted to live according to their own laws. The Dragons refused to relent, and a great war erupted. It was in this war that the race of the Titans fell, including the original Titan, Ymir. From his spilled lifeblood came two new races: the Dwarves and the Giants.

The Giants were an oppressive people. To escape them, the Dwarves hid in deep caves, chancing upon the Primeval Gates—from which demon hordes burst forth, and the exiled Old Gods were set loose upon the world. They taught crafts to the Dwarves but quickly lost interest in their students. They turned to the Giants, instead, and united to wage a war in attempt to destroy the world. The Dragons managed a narrow victory against the combined might of the Demons and Giants, but it cost them deeply. Exhausted, they plunged into slumber. The Dwarves, with their newfound freedom, moved south where they created the Urgand Kingdom.

Era of the Two Kingdoms[]

It is written in the annals of history that Physis was enlightened with the importance of the cycle of life and death. Physis then planted a Seed of Chaos in the ground, and the Tree of Life, Liliantes, grew. From the fruit of this tree, the Elves were born. In the dense forest near the Tree of Life, the Elves founded El Gradis and formed an alliance with the Dwarven Urgand Kingdom to defend their borders from the barbarian tribes. The Golden Era of the two kingdoms, however, was short-lived and would not last for more than a millennium.

The first Dragon to awake from deep slumber was Ventus, who found himself a stranger in the world's new surroundings. Seeking to prevent change, Ventus swallowed all of the Seeds of Chaos collected so long ago by his kin and fell into madness, attacking the Kingdoms of the Elves and Dwarves. Many were slain and much was destroyed before the alliance could seal Ventus away in his lair.

The Dwarves were brought to the verge of extinction. To protect themselves, they wrapped Urgand in a massive wall and sealed themselves within. The Elves lost their beloved queen, Erlione Liliantes, and found their Tree of Life severely damaged by Ventus's flames. In their fear of an uncertain future, the ruling caste of El Gradis decided to turn to the power of Chaos. Many of the Elves opposed this, and El Gradis erupted in civil war. The Elves split into two groups, the most rebellious moving to the southern lands. Thus, the era marked by the prosperity of these two races ended.

The Coming of Men[]

Orcs, goblins, trolls, and similar creatures evolved from the Old Gods’ original creations. They did not follow the will of Physis, as they were endowed with their own will, overwhelmed by their passions, and simply could not resist the influence of Chaos. These creatures came to be the barbarian tribes. The Elves and Dwarves tried to keep order in the world, beginning the conflict between the races and the barbarian tribes. And then, finally, with confidence and intelligence in a time of order and chaos, there rose a new race: the Humans.

Rise of the Lumen Empire[]

Many creatures inhabit the world. Some, were born by the will of the gods who themselves created the Providence. But there were those that were born from evolution. These beings inherited a will of their own and opposed the order established by the Providence. Due to the conflict between the first-born races and the barbarian tribes the world was a place of unrest. After a time in this land of strife, humans appeared. The people of the human race built a nation and named it after the hero who banished the orcs, Lumen. The Lumen nation forged an alliance with El-Gradis, the damaged nation of elves. Having lost immortality, the elves understood that in order to save their knowledge they must share with these new people. Magic and science were virtues highly valued in the Lumen Empire. Masters of magic held great power and for a long time they ruled the state. Ermekis, not yet ascended to the throne, transformed the nation into a monarchy. This ushered in the Golden Age of the Lumen Empire, which lasted for hundreds of years.

Nigra Turis and the Dark Ages[]

Then came the end of the of Lumen Empire era. In an effort to regain power, the mages performed a dangerous yet powerful ritual. They opened the gates to another dimension, and from there into the world of the demons came back. They worshiped in Hornus, a huge black tower and created a bridge between the worlds. This event is known as a catastrophe at Nigra Turis, the entire world felt its calamity. In the coming wars, the young barbarian tribes fell quickly, and the Lumen Empire fell into disrepair. Only the combined strength of the humans, Sylvan Elves and Lupus were able to resist the attacks of the converted barbarians, driving them from Lumen borders. There was then proclamation by king Aygor Valor, who became the successor of the Lumen throne. He gave the elves and Lupus citizenship. Thus was born the empire, named Heiron. But King Aygor soon died, and his three sons, desperate for the throne, unleashed a devistating civil war. The war of the three princes lasted seven years.

While war raged in the north between the three princes, cities in the South prospered. Sforza House of La Spezia proposed to sign a joint defense treaty, and the southern lands were united under the name Amistad. Not wanting to put up with the oppression of the Empire, the Southerners began looking for allies. Under their blood-red banner of freedom stood the Aqua Elves. When the troops of the Empire marched to pacify the cities of the south, they opposed an army three races. Faced with fierce resistance, the Heiron Imperials retreated. The Amistads' victory gave rise to a new era - the era of uncompromising confrontation between the Empire and the Commonwealth of Independent races.

Embers in the Storm[]

Hundreds of years since the beginning of the Fifth Era, the opening act to a colossal conflict that will shake the whole continent is finally here. The fateful and brutal war has begun. The various races of this era are all participating for reasons of their own.

Which side will you choose? For what will you risk your life? What will be your legacy?

The Dawn of the Habichts Empire and the Fifth Era[]

The Habichts humans united with the Sylvan Elves and Lupus tribes to form a Holy Alliance of the northern continent. With their combined strength, they achieved great victory against the barbarian Blood Alliance, bringing an end to the Dark Ages and ushering forth a brilliant new era. As the newly ascended champions of the northern continent, the Habichts Empire further strengthened its relations with the other northern races by proclaiming the Sylvan Elves as Guardians of the Realm and the Lupus as Earls of the Land. Then, the Habichts journeyed into the South, reclaiming the territory of the ancient Lumen Empire, liberating Spezia and other city-states one after another from the barbarians.

Birth of the Amistad Federation[]

In the Dark Ages, the Amistad people of the southern continent lived their lives in terror of barbarian attacks, hiding away in isolated cities, just barely maintaining their existence. But under the protection of the Habichts Empire, the Amistad flourished. City-states, including Spezia, quickly regained their former prosperity. To facilitate their society's growth in diplomacy, military, industry, and commerce, a new political community named the Amistad Federation was formed. But as the southern continent developed, so too did the people's dissatisfaction towards the once welcomed Habichts Empire's rule and intervention. 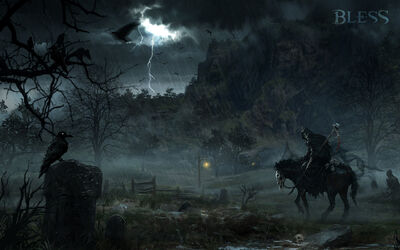 Clash of the Factions: Outbreak of the Fall War[]

Though the Empire fought to prevent this, its forces were driven off at the Padana Frontier. The Amistad Federation achieved splendid victory, and morale in the south soared. Furious, the Habichts Emperor deployed alongside his military in a massive expedition to confront the Amistad. And so, the Fall War that would send ripples through the Fifth Era began.

With the decisive battle now upon them, the Amistad Federation sought to compensate for its inferior fighting force with support from the other southern races. The first to join hands with the Amistad were the Panteras, who had constructed a united kingdom after a long period of division and endeavored to expand their own power. The Iblis, who were preparing to advance into the southern continent after expelling the Fedayin (members of an exclusive ruling class) from their home world through a revolt, shared the same interests as the Amistad and were next to become allies. As a result, the three races entered into a permanent military alliance. Not long after, the Aqua Elves also joined the alliance to exact revenge on the Sylvan Elves, allies of the Habichts. And so, to combat the Holy Empire, the Union Alliance of the southern continent was born.

The Empire's Crisis and the Hieron Holy Alliance[]

Certain that victory was imminent, the Habichts Empire marched upon the Padana Battlefield with its Emperor and encountered the newly formed Union Alliance. But the Habichts experienced devastating defeat. Not only did they lose the war, but they also lost their leader, who was killed in the conflict. As the Empire retreated, the Amistad Federation expanded its realm of influence into the Cornus Mountain Range. Instability returned to the northern continent in the wake of the Habichts Empire's exhaustion, and barbarians began to invade once again. The Sylvan Elves and the Lupus, traditional allies of the Habichts Empire, thus came forward to restore peace and order to their lands.

The Era of South-North Confrontation[]

With the Amistad leading the Union Alliance, the Habichts Empire leading the Hieron Holy Alliance, and the continents settled into a confrontation between the two factions, other races also moved to align with either side. The Fedayin, exiled by the Iblis, joined with the Hieron Holy Alliance in an effort to reclaim their home. Although the Mascu and Sirens remained neutral, almost all of the other intellectual races were divided in the conflict between north and south, and a new era of war began.