Mage is one of the classes in Bless Online.

About the Mage class[edit | edit source]

Guardians of the Ancient Order

They strive for a lifetime study of every phenomenon and all the structures in the world to reveal the relationships and laws between them. The techniques that manipulate elements like water, fire, wind or lightning are just a byproduct of the known research, these abilities can harm opponents or can be used as protective spells in combat. Mages rather devote themselves to libraries or laboratories instead of the battlefield. They prefer to wear light cloth robes and always use staves or wands as catalysts for their abilities.

Mages are natural scholars, they lack physical strength and prefer to wear light cloth robes to increase their spell power, because of this mages avoid close combat encounters.

Their powerful magic wields powers such as freezing or burning their foes or blowing them away with the power of wind and tearing them apart from far enough to avoid melee combat.

The elemental magic of Mages can cause a great deal of damage to single targets and in addition, if they connect various magic spells, they can also cause harm to others around the main target.

They can also use magic to protect themselves with elements.

By freezing their opponents, mages can completely take them out of action. The spells they have access to are really powerful.

Mages always use a catalyst such as a Wand or a Staff and also prefer to wear light cloth robes in order to empower their spells. The lack of defense is supplemented by various protection spells. 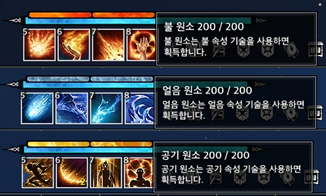 The resource used by Mage

Mages can cast magic spells by consuming mana during combat.

Mana gets restored naturally over time.

The more powerful the spell is, the greater the amount of mana is consumed. Mage requires careful mana management for a more efficient combat.

The Mage’s Defensive mechanism is Blinking.

A player using the Blink ability

A defensive/escape mechanism that moves the mages forward for some energy, while also removing crowd control (CC) effects and making them immune for the time they are in the animation.

How to use[edit | edit source]

To use Blink you have to press the Shift key on your keyboard and it consumes a certain amount of energy.

It can be used several times if you have enough energy.

If you run out of energy, it is no longer possible to use this mechanism until you recover your energy.

The races which can choose this class[edit | edit source]

“The essence of magic and the logic of knowledge are only temporary mysteries. The magical phenomenon is the result of certain causal relationships. Fate does not play dice” – Archmage Sohar Mesquite

Mages across the world dedicate their lives to studying structures and relationships between them and universal laws. They acquire the knowledge to manipulate water, fire, wind, and earth and can conjure even natural phenomena such as lightning and blizzards. Mages combine their knowledge to be formidable in combat.

Originally, only the Elves had discovered magic and it became their exclusive property. The most powerful Elven mage was named Yamalo. However, after the fall of the Elves over a millennia ago, magic spread to other powerful species – even including Humans.

Today, the most profound library of knowledge can be found in the El Llano El Gras. It is where the Guardians of the Ancient Order seek to research and create new spells.