Mystic is one of the classes in Bless Online.

About the Mystic class[]

Mystic, a mysterious being

When a mystic asks those who saw him using his power about what they saw, answers tend to differ depending on the situation. “It was scary.” “It was beautiful.” “It was creepy.” Answers vary, but they all agree that “it was mystical.” Those who feel the dark energy flowing like a cold wave from a mystic’s body when he is full of malice would describe it as “scary”, and those who feel the warm energy that spreads out like a cloud from a mystic’s body, when he is possessing goodwill, describe it as “beautiful”.

Mystic is a class that can administer a variety of beneficial effects, such as the ability to inflict continuous damage to enemies and the ability to continuously heal allies. If mystics ever need to face an enemy alone, they tend to first employ tactics that provide continuous damage before finishing off with a skill that causes immediate damage. When forming a party, mystics can easily lead combat by healing allies with various continuous healing effects and by administering beneficial effects. Mystics can also minimize damage to their allies by debuffing multiple enemies.

During combat, mystics, who provide help from behind their allies, carry a staff that is the catalyst of their magic and wear light cloth robes that assist with ability power. 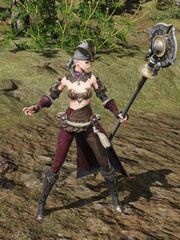 When equipping part of a set:

-Chances of magic resistance increases by 0.7%

When equipping the whole set:

-Chances of magic resistance increases by 4.9%

-When resistance occurs, 10 energy is gained

Mystics consume “Mana” when in combat. Mana recovers naturally with time but the use of certain skills may speed up the recovery process. Mana is consumed when healing your allies, inflict magical damage, or debuff your enemies.

Harmful effects and crowd control effects will be removed if the skill [Bind] is used. Nearby enemies will also be stunned.

It can be used instantly by using the SHIFT hotkey during combat, initial energy expenditure is 35, and reuse time is 0.50 seconds.

To use Bind you have to press the Shift key on your keyboard and 35 energy is consumed upon use. 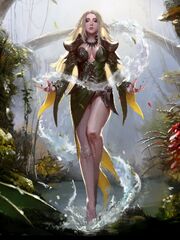 It is unknown when exactly mystics were first known to the Bless continent. The female Siren mystic, “One Who Explores Fate”, who participated in the war between the Empire and the Alliance, was the first mystic to have existed in history. However, if you think about the point that those who possessed the same abilities as mystics were often mentioned in old folktales, then it is hard to say that she was the first mystic. There is no one who can accurately explain the principles behind the mystics’ powers. Some say that mystics communicate with the spirits of the world which are said to be their slaves while others say that they are borrowing the power of nature’s spirits.

It is said that the leaders of the Mystics pass down the name “One Who Explores Fate”. They think, that, if you look at the training process of the descendants, it may even be vaguely possible to understand the principles behind their powers.

According to those who observed their training, mystic candidates spend the first 100 days after being selected as candidates observing objects. Afterwards, they listen to the sound of objects for another 100 days, and for the last 100 days they receive training on feeling objects while covering their eyes and ears. At this time, candidates with mystic talents no longer see the world using their eyes, and they are now aware that the world is full of beings that cannot be seen or heard. Also, for the remainder of the training period, mystics may at times make requests and give orders to those unseen and unheard, or they may even carry out their requests. Even after training, a mystic will use not his eyes or ears, but his heart to understand the essence of all objects in this world. It is said that this is why the Mystics of the world cover their eyes and ears with a hood.