Ranger is one of the classes in Bless Online.

About the Ranger class[]

Rangers prefer long-range weapons, and with astonishing concentration shoot extremely precise arrows. The ranger possesses remarkable observation ability and patience, and never loses a target once he starts tracking it. Depending on the situation, rangers can make the situation advantageous by assisting their comrades through concentrating their attacks on the most powerful or menacing enemy. The ranger can skillfully draw away his opponent’s attention even if he was tackled, and can protect his comrades from snares and traps.

The key to the ranger’s combat method is to identify and attack first. The ranger, who is weak in close combat, must always maintain a distance far enough so that while he can attack his enemy, his enemy cannot attack him. For this reason, the ranger makes the most of his long ranged weapon, the bow, and either slows down his enemy using a variety of skills or tie up their feet and kill them before they come close. Nevertheless, even if close combat does break out, the ranger can maintain his distance using his outstanding agility. 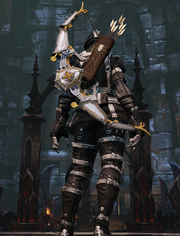 Light armor - Chances of dodging increases by 0.4% per part - Fighting power increases by 3%, and 10% energy is acquired when dodging if 7 parts are equipped.

Concentration naturally recovers as time passes or when one uses general attacks.

Skills cannot be used when there is a lack of Concentration, therefore one can experience difficulties in combat if Concentration is depleted.

All crowd control effects are removed and the ranger rolls to the front.

The dodge move can be used as a non-chain skill only and consumes 0 concentration. Can be stacked 3 times, with a 30 second cool down.

“An arrow that leaves the string never returns. No matter where it goes, it will end up alone” - Elven Proverb

Regardless of race, there are always those who enjoy solitude by nature. They prefer deep contemplation to noisily socializing with others. If the situation allows, they may wander the wilderness alone for years. Most of those who are born with such a nature usually chose the path of a ranger. The reason for why the elves have produced so many rangers since ancient times is also because of this. Rangers value their personal space, and even friends or enemies are seldom allowed to venture too close. And so they prefer long-range weapons, and while using their outstanding concentration they can shoot perfectly precise arrows. Rangers never lose a target once they start tracking as most possess superior observational ability and patience. A skilled ranger gives the same impression as a wild animal, and can easily survive even without interacting with the civilized world for a considerably long period of time.